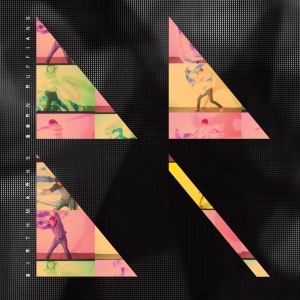 Born Ruffians have successfully made an album with something for everyone: alternative listeners, indie-folk fans, rock lovers and a whole lot in between. Their third LP, ‘Birthmarks,’ released April 16 on Yep Roc Records, doesn’t fit the typical guitar/rock mold and that’s what keeps it fresh and relevant.

‘Birthmarks’ got its beginnings on a farm as the group sought an organic angle to their music rather than relying on a sterile space. This from their bio: “These songs — ‘Birthmarks’ — came out of a dusty living room in an old house, in between chopping wood and building bonfires, playing crokinole at the kitchen table, cooking family dinners and shooting beer cans with a bow and arrow. We’d wake up, head downstairs from our rooms, and write.”

They experiment with a range of elements, such as on ‘6-5000’ where they wrap a catchy guitar melody around a haunting voice, a booming drum and just ride it. Heavy bass contrasts nicely with acoustic and other light-footed sounds on this album. A heavy disco beat erupts on ‘Permanent Hesitation,’ a love song between two cheaters. The Ruffians can also sound like indie-rock veterans, as on ‘Ocean’s Deep’ and ‘Never Age.’ The band is upbeat and jubilant, even on ‘Dancing on the Edge of Our Graves,’ where guitarist and vocalist Luke Lalonde shows twinges of David Gray. He can be like a chameleon too, like on ‘Rage Flows.’ The brightness of ‘Needle’ hooks you in. The fuzzy feedback on ‘Too Soaked to Break’ proves the collaboration knows how to create brave new sound.

Born Ruffians are in the middle of a U.S. tour, and played at Allston‘s Great Scott on April 15. The tour wraps up in Detroit on May 22.

Dig it or Ditch it: Dig it 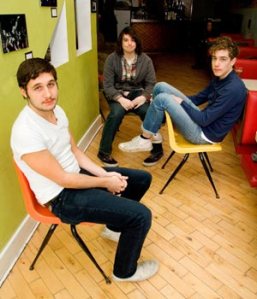 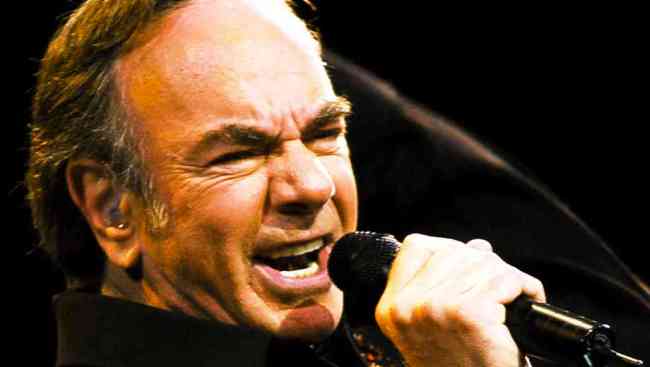 UPDATE: Here’s a link to another quick story about Diamond at Fenway: He called the Red Sox one hour before the game and asked if he could sing for them. That is incredible.

Saturday’s Red Sox game against the Royals proved to be a very special one.

The game was played at a new time, rescheduled after the horror of the night before. All day Friday, the entire city, including Watertown, Cambridge and surrounding communities, was on lockdown as authorities searched for a suspect in the Boston Marathon bombings on Monday. The city was a ghost town as police, FBI, and various law-enforcement agencies scoured the area.

Three people died in the blast, and an officer was killed Thursday night, allegedly by one of the bombing suspects. Dozens more were severely injured Monday. More than 170 were hurt in the dual explosions near the finish line. The suspect was finally taken into custody late Friday night.

There were a lot of flags in the crowd at Fenway Park Saturday; a lot of signs showing fans’ and Boston’s resilience in the face of disaster. ‘Star Spangled Banner’ and ‘God Bless America,’ were proudly proclaimed.

The Boston Police Commissioner, Gov. Duval Patrick and officers showed up on the field earlier in the game as a way for the Red Sox to honor them.

The city needed some closure after Friday’s harrowing events.

I’m a Massachusetts native, but first knew about the “Sweet Caroline” phenomenon as a student at UMass Amherst. There was a bar I frequented where every night at 10 they would play the soft-rocker. It was always one giant singalong by drunk college students. Neil Diamond was your feel-good friend.

So it goes at Fenway.

The Diamond hit has been played there since at least 1997, usually in the middle of the eighth inning. There’s always a pause to let the crowd sing ‘bum bum bum,’ — it’s a perfect rallying cry.

I was not expecting to see Neil Diamond at the game; not sure who in the crowd knew he was coming. He allegedly came unannounced, and asked to sing the song. It was pretty clear he made a special trip to Fenway, and Red Sox Nation was happy to welcome him.

The veteran singer and songwriter strode onto the field, donning his Sox hat and flashing a peace sign. There was no question as to what song he was going to sing. Excitement was mounting.

It was completely off sync– you hear one line, then you hear it again. Hey, why not;  double your fun. But it didn’t matter; everyone appeared to be singing along. You could feel the energy; see everyone singing and pumping their fists.

In the bottom of the eighth, the Sox’ Daniel Nava rocks a three-run homer to put the Sox on top. The announcer says ‘Boston, this one’s for you,’ as Nava points to sky and rounds the bases. A Royals’ single home run soon after brings them almost eye to eye with the Sox, but the Boston boys prevail.

Here’s a story from the LA Times about how ‘Sweet Caroline’ has been played at a lot of sporting events, including at Yankee Stadium, in solidarity with Boston. 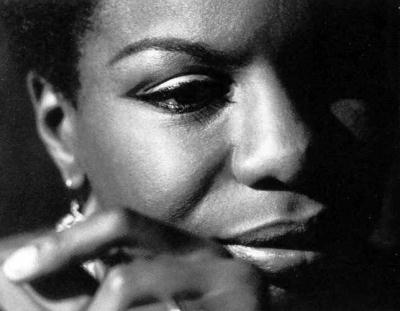 I recently discovered singer/songwriter Nina Simone by accident, while searching for James Brown music on Youtube.

Simone was a classically-trained jazz pianist, who succeeded in not pigeonholing herself into any genre. She performed standard covers with emotional original arrangements. Hearing her sing on a loving “Brown Baby” hooked me on her sultry voice, dark and mellow. She also sounded defiant and full of spite, as on the scathing “Backlash Blues” in later years, when she championed civil-rights causes.

So I bought a Nina Simone ‘greatest hits’ CD —— ‘Nina: The Essential Nina Simone —— to dip my toe in the water. One song that stood out for me was ‘Plain Gold Ring,’ about a woman pining for a married man.

She sings plainly at first– she knows he’s not going to be available, and she’s resigned to that fact. Before the second verse though, she cries out a regal ‘oh’ which extends into a plaintive anthem where you can almost see her riding a cold ocean, waiting for the man who never comes. It’s clear that wanting what she can’t have is going to keep her from living.

The stark drums march the tune along as her repeating piano melody keeps step. As she sings the chorus at the end, her voice fades into the dark. I love to listen to it.

While surfing the Tube, I found Kimbra’s version of this song. I’m aghast at Kimbra‘s take, in which she  unabashedly uses an Audacity-type voice editor. It’s so sterile when up against Simone’s.

It’s not possible to really compare these two versions of ‘Plain Gold Ring,’ but you can try:

Let me know what you think.

Dig It or Ditch It: Dig Simone’s version, Ditch Kimbra’s.

Mvula’s ‘Sing to the Moon’ reaches the stars

Laura Mvula is a surprise.

‘Sing to the Moon’ is a hybrid of classical, pop, jazz, and vocal perfection. The horn section provides a backbone on the title track, while Mvula’s voice sails above. Strings and drums, even harp and bass cello, complete the picture with more airy elements  — the tunes never feel crowded.

The mood on her debut release is light and spacious and puts you right at home. Classical elements, like strings and horns, are still accessible to casual listeners. Layered a capella vocals drape everything in a blue mood, but don’t drag the songs down. With each listen, the layers become more clear, the songs more memorable.

Mvula, 26,  is a classically trained British singer/songwriter. She started writing songs on her laptop when she was a teacher in Birmingham. She made her U.S. debut at this year’s SXSW festival.

Her voice sometimes has the twang and vibrato of the late Amy Winehouse, such as on ‘Like the Morning Dew,’ but that’s where the comparisons end.

While the CD is often dreamy and abstract, it’s anchored by the lyrics and strong original melodies, such as on ‘Make Me Lovely.’ ‘Green Garden‘ is immediately uplifting, as bright clapping and Mvula’s beautiful background harmonies carry the song. It’s an easy choice for a radio hit. The glittery and ethereal ‘Can’t Live With the World’ seems to be lifted from Bjork via ‘Vespertine’ but is nonetheless enjoyable to hear.

‘Sing To the Moon’ is not all happy times — there’s a bit of attitude as well, as on ‘That’s Alright.’ Mvula asks, ‘Who made you the center of the universe?’ to the person judging her because her skin’s not ‘light’….’I play my own damn tune, I shine like the moon.’

Laura Mvula, ‘Sing To the Moon’ out May 14, Columbia Records. Digital release April 16.

First single ‘She’ is available on iTunes.

Dig It or Ditch It: Dig it. 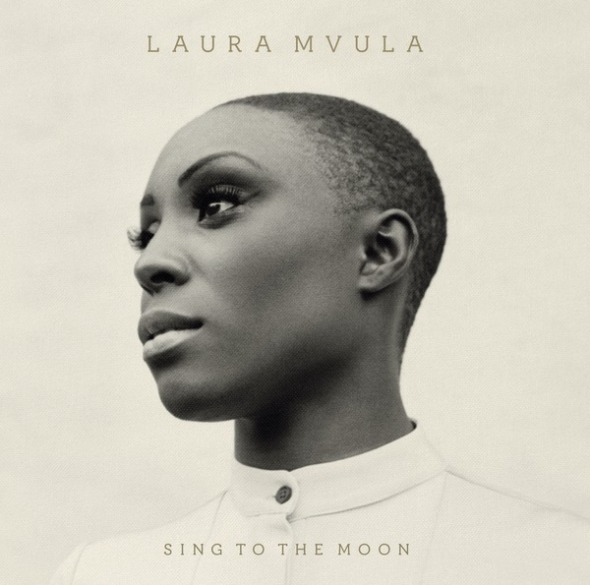 Tagged as Lauren Mvula 'Sing to the Moon'

The band called The 1975 has been creeping into my conscience this week. They are a Manchester, UK outfit and are just scratching their way up the ladder in the states. The group has several EPs available, Music For Cars, Sex and Facedown.

The song Sex has been circulating the alt-radio waves. Their sound could be described as peppy alt-rock, with twinges of underground 80s and synth. Their vocals are quite like pop, as on the airy Head.Cars.Bending. Quite intriguing.

Another EP is slated for May on the Dirty Hit label, BUT, rumours that they are jumping to the big labels means catch them now before they are harder to reach.

Here’s a link to listen to their tunes and a link to their Youtube video Sex. 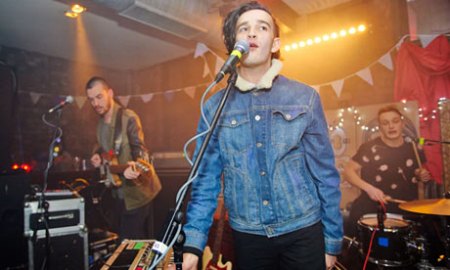 The Not So Innocents Abroad

Historical Ramblings on Sex, Food, and Other Bodily Pleasures, in Paris, Capri, and Beyond

The Not So Innocents Abroad

Historical Ramblings on Sex, Food, and Other Bodily Pleasures, in Paris, Capri, and Beyond