With the constant tick-ticking of the rim and two acoustic guitars, the three of them play a stripped-down version of their song “Make It Right” for Paste, but to hear them in their full punk-rock glory, watch them do the cutting in their video for “Hurricane” from 2011:

The debut from Boston-based thrash-metal-shoegaze group Astronoid is out June 10 on Blood Music, and Metal Injection has posted the lyric video for “Up and Atom.” One listen to that song will hook you– their vocal harmonies simply float in the heavens, while waves of guitars perform their own shredded masterpiece below. Their debut is going to be huge.

Almost everyone’s reviewing Radiohead’s A Moon Shaped Pool, including an 8-year-old who’s broken the songs down in very simple terms. Radiohead’s music is extremely dense and layered with different meanings, so it’s refreshing to see a child tackle the album, track by track. And to be honest, every music critic has to start somewhere, and my early reviews started like this, so kudos to him for getting an early jump.

Read it for yourself:

Jazz/classical/synth and sonic mastermind Floating Points (Sam Shepherd) has released the studio version of an 18-minute song called “Kuiper,” part of his upcoming Kuiper EP out July 22 on Luaka Bop/PLUTO. Shepherd had earlier released the live version on video. His instrumental works are pieces of electronic art. Kuiper will be available to download May 20.

Actor and MC Daveed Diggs can rap 19 words in 3 seconds — the fastest rapper on Broadway. While there’s not many rappers on Broadway, that’s pretty damn impressive. Diggs shows off his skills in the song “Guns and Ships” which he performs on the massive Broadway hit “Hamilton.”

Don’t blink as he slams a few verses from his hip-hop group, clipping., on The Tonight Show Starring Jimmy Fallon:

EL VY, a project created by The National’s Matt Berninger and Brent Knopf of Menomena, have mixed and released Wye Oak’s song “Need A Friend.”

Wye Oak’s Andy Stack said this about the remix:

I spent the last quarter of 2015 playing drums on tour with EL VY. “Need a Friend” was consistently our closer, and arguably the most high-energy song of the set. By contrast, when I went to remix it, I imagined it as a Sade-style slow jam (complete with horn solo), a genuine reading of the angst, “love” and “heartbreak” which the original presents as more tongue-in-cheek.

Wye Oak has been hinting at new music and will head out on tour this summer.

It seems like every few months, Parquet Courts creates new music. Their most recent EP, Monastic Living, was released last November, and now they’re back with more. Frontman Andrew Savage talks about the origins of their new album, Human Performance:

“I began to question my humanity, and if it was always as sincere as I thought, or if it was a performance. I felt like a sort of malfunctioning apparatus. Like a machine programmed to be human showing signs of defect.”

Their prolific activity could be traced to Savage as well the band’s restlessness. Parquet Courts also released a single from Human Performance, “Dust,” with video of an unkempt schlub working and eating noodles in what must be a skeevy office, because the cameraman keeps wiping his video screen.

“The unavoidable noise of NYC (that) can be maddening, the kind of the impossible struggle against clutter, whether it’s physical or mental or social,” says singer and guitarist Austin Brown, who also produced and mixed the album. The new album is said to be a direct descendent of 2014’s Content Nausea and its analysis of modern anxieties.

Human Performance is out April 8 on Rough Trade. New tour dates are below the tracklisting.

Girl Band’s videos are almost always incendiary, so disturbing images from a fake kids’ TV show is business as usual for them.

Director Bob Gallagher talked about his inspiration for Girl Band’s video for “Paul,” and it involves Big Bird:

While I was researching I watched a documentary about Big Bird and there’s a line in where Carol Spinney says that a woman was complimenting his performance but that she couldn’t see that inside the costume he was crying. It’s quite tragic. I think everyone has experiences of having to put on an outward expression, and feeling trapped, so Paul’s costume is a visual extension of that. He’s inside the suit, at a distance from everybody around him, but wearing this absurd smile that’s totally false to what’s going on inside.

If the video is meant to illustrate how people’s hidden thoughts are closer than we think, then Gallagher was successful. “Paul,” in the girl-pig suit in the video, manages a smile at co-workers, but in the dressing room he looks morbid. Seeing his eyes through the pig’s nostril is just creepy on so many levels. Just be glad “Sunrise Farm” is not a real kids’ show.

As the song progresses, it gets darker and more sinister, with a creeping bass line that keeps regurgitating and a building drum beat that signals something wicked’s coming.

As the video continues, Paul seems to be losing his mind, dancing with chickens and foxes, and doing the same activities day after day. The only difference is, he’s getting more drunk and high. It does not end well for him.

“Holding Hands With Jamie” was out Sept. 25 on Rough Trade.

Filed under From the 2015 vault, Noise Punk, Noise rock, VIdeos

Hopefully more details will be on the way soon, but you can preorder “Monastic Living” here.

Punk/indie band Titus Andronicus has released a short film, “The Magic Morning,” which incorporates music from his upcoming album, “The Most Lamentable Tragedy.”

The music stems from what he says is the second act of “Tragedy,” which is Tracks 7-12, or Side B of the first disc.

Singer/songwriter Patrick Stickles wrote and directed the video, which you can see below:

If you haven’t seen it yet, here’s the lyric video for the punk blast of “Dimed Out.” One of the best lines has to be “Don’t wanna buy an ounce– For me the right amount is the entire pound.” If you don’t smile at its rebellion, you’re missing something.

Also today, the lyrics to “The Most Lamentable Tragedy” are out on Genius: See it here, complete with annotations.

“The Most Lamentable Tragedy” is out July 28 on Merge Records.

* with Spider Bags
^ with Baked
% with Ex Hex

Nots thankfully up to no good on punk single “Virgin Mary”

Punk quartet Nots recently released a new song, “Virgin Mary.” They know a good formula when they hear one, and “Virgin Mary” hasn’t strayed in terms of harsh guitar scratchings, synth bleeps and deep bass rumblings commonly found on their off-the-radar debut, “We Are Nots.”

Listen to “VIrgin Mary” via Stereogum. and at Soundcloud.

The 7-inch single, with B-side “Shelf Life,” is out June 23 on Goner Records.

If you’re craving a heavy dose of craziness and raw DIY flavor, then check out “We Are Nots”– one of the most original records of 2014. 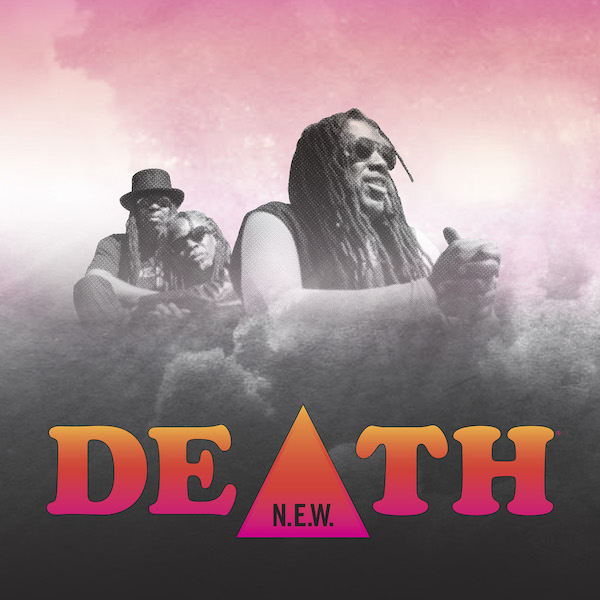 Protopunk band Death, which originated in Detroit, before quietly retiring to the woods of Vermont, has come out with its first new music since 1975, when they released the album “For The Whole World To See.”

The album is called N.E.W. and is streaming in full at VICE.

Death has managed to stay under the radar for many punk fans, even now. If you need a quick primer, check out my story from last year on how I discovered Death.

N.E.W. is out April 21 on Drag City imprint Tryangle.

This guy’s weird mustache: What’s up with that?

The latest video from Parkay Quarts (or Parquet Courts, however you like) for “Pretty Machines” paints a picture of an ordinary day, like any other in one man’s life: Get up, brush teeth, wash dishes, go to bed, repeat. Parkay Quarts manages to blend each of this guy’s already-mundane activities into one long drudgefest.

Besides the overlapping frames that clumsily and jarringly stitch events together: the one weird thing — the off-kilter mustache-y thing he puts on his face every day. What’s up with that?

Check out “Pretty Machines” on Youtube, as well as Parquet Courts’ performance on David Letterman.

Nots have punk locked up with “We Are Nots”

Slow songs are overrated. Any band that says they’re punk but then tries to sneak in a “slow” song — imposters. Stick with the real thing.

If you’re looking for that authenticity, that brazen punk, Nots have it.

There’s a bold intensity to the quartet’s latest, “We Are Nots,” — a passion fueled by youth’s abandon and bravery. That lack of fear is what drives young music and ideas, and what keeps real punk music alive.

If you listen to “Dust Red” from the band’s earlier 7”— their sound was even more garage and muffled in its darkness and desolateness. It’s good to hear that with this full-length debut, they’ve been polished up a bit from that extreme lo-fi scuzz-dust.

With the blazing opener, “Insect Eyes,” they’ve already announced their signature sound, although they sometimes veer off with indie-rock bass melodies as on “Strange Rage.”

Besides strong showings by bassist Madison Farmer and guitarist Natalie Hoffmann, Charlotte Watson’s drumming is delivered machine-gun style, and Alexandra Eastburn’s synth keeps up that creature-feature blackness that gets stuffed into your head with a pneumatic drill.

The bonus on “We Are Nots” is that they’re mostly full-length songs– most are more than 2 minutes. “Reactor” is nearly 4 minutes—eons for a punk song, but no worries—it’s not overdone, just damn fun.

It’s so refreshing to hear four Memphis women blasting up such a hardcore sound from the underground. It’s like a breath of fresh air— heavy, strong, rank air, laden with sex and sweat, that you just can’t get enough of.

The album is out Nov. 11 on What’s Your Rupture?, while the worldwide digital release will by Nov. 17 on Rough Trade. Also check out the first single, “Uncast Shadow of a Southern Myth.”

Parkay Quarts/Parquet Courts have released a slew of tour dates to keep everyone toasty through the winter.

Mon. Feb. 2 – Tallahassee, FL @ Club Down Under (as Parquet Courts)

Dedicated to identifying patterns in music, culture, and the Universe.

Dedicated to identifying patterns in music, culture, and the Universe.